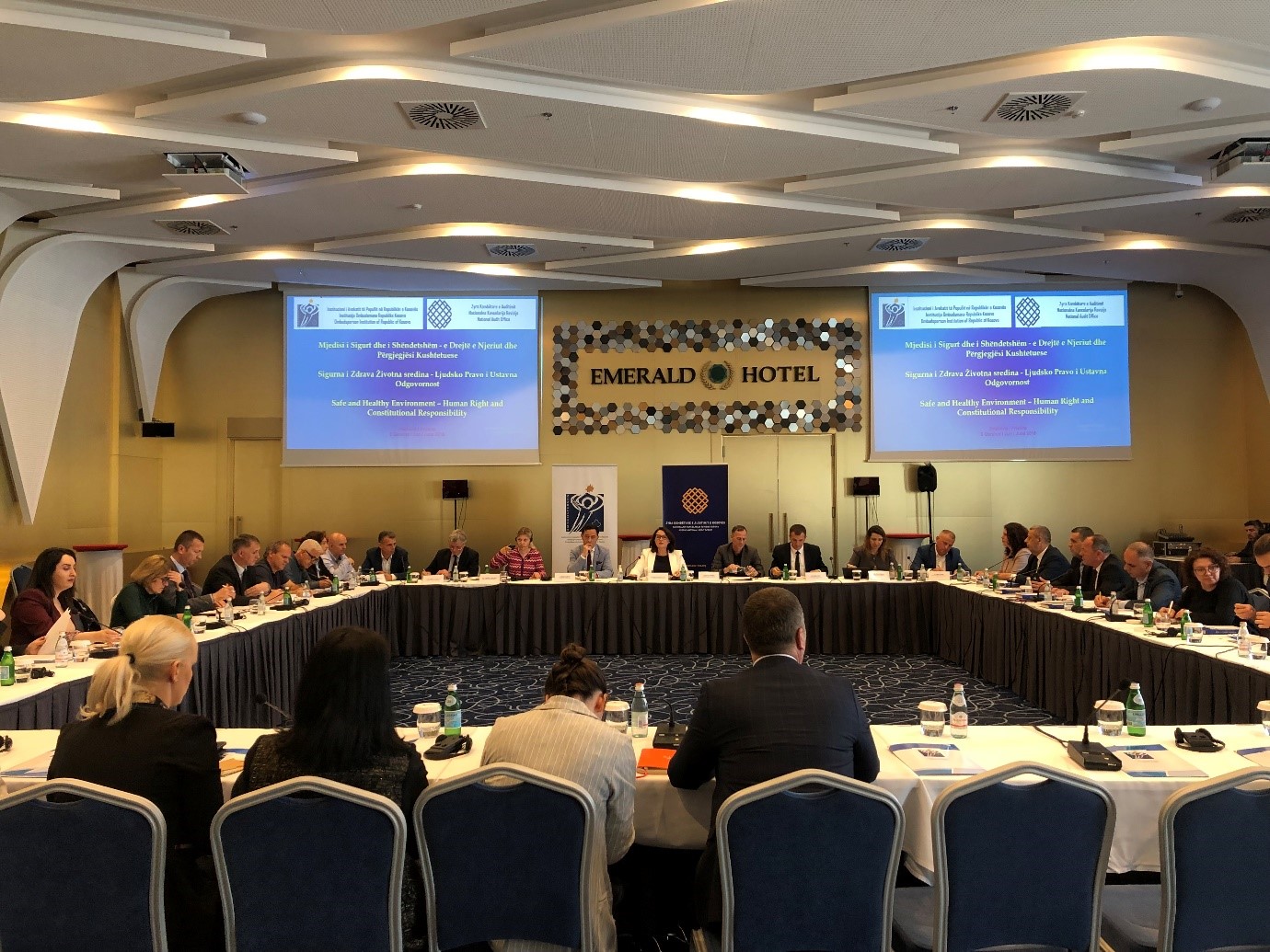 On World Environment Day, the Ombudsperson Institution in co-operation with the Kosovo National Audit Office organised a joint roundtable on “Safe and Healthy Environment – a Human Right and Constitutional Responsibility”.

The Auditor General, Mr. Besnik Osmani, in his remarks has said that the purpose of organising this roundtable is to build an alliance between the two constitutional institutions, in order to have more influence on important issues for the citizens of our country based on our mandate: – one is to protect human rights and the other is to show how public resources are used by users of public funds. In this respect we aim to raise public awareness on important issues and to attract the attention of policy-makers, as well as to promote concrete action in this direction. “To have healthy land, water and air we should ensure that all public and non-public organisations with influence and responsibility are doing their job well,” Osmani has said.

Moreover, Mr. Osmani added that the National Audit Office, through auditing, has approached this problem from two perspectives: by carrying out regular financial audits, we added the component of good governance, through which we are able to make valuable recommendations on how the work of institutions can be made more efficient and in doing so  also the services to citizens; as well as carrying out specific audits on important topics, highlighting the real situation and we are making concrete recommendations as to how to improve this.

The Ombudsperson, Mr. Hilmi Jashari, has expressed his particular satisfaction as it is a rare case in Kosovo that two Independent Institutions, the Ombudsperson and the Auditor General have contributed to the assessment of the environmental situation in the country, and have moreover made concrete recommendations addressed to the public authorities regarding the actions they should take to improve and to bring to light the constitutional guarantee that our country has enshrined in Article 52 of the Constitution of the Republic of Kosovo. He also emphasised that economic development in Kosovo should not be conditional and should not damage the human rights.

The representative from the European Union Office in Kosovo, Mrs. Annette Fath Lihic, after speaking about the importance of the environment in the life and health of the population, has also raised the issues addressed by the Progress Report of the Country regarding environmental issues. She said that according to this report, Kosovo is still in its early stages and no progress has been made on this issue. Kosovo’s environmental problems and the lack of political will of institutions in taking adequate measures to protect the environment have affected the welfare and health of citizens.

At this roundtable it was also discussed on the role of the Assembly in improving the environmental situation in the country, where the MP of the Assembly of Kosovo, who is also a member of the Kosovo Assembly Committee on Agriculture, Forestry and Spatial Planning, Mr. Sali Zyba, raised the concern of failing to function of all links in the chain of institutions.

This roundtable was organised on World Environment Day. The purpose of this roundtable was to highlight the importance and co-operation of institutions in the implementation of recommendations addressed to central and local level institutions in order to improve the situation of environment in the country. Representatives of the Assembly of Kosovo, the EU Office in Kosovo, the justice bodies, the Kosovo Police, the Ministry of Environment and Spatial Planning, other central and local level institutions, and international organisations in the country as well as representatives from civil society attended the roundtable expressing their opinions.

All participants agreed that in order to have a healthier environment, there is a need for proper mobilisation, co-operation and co-ordination of all institutional departments, civil society and citizens.